In case it's escaped you or the weather hasn't been so favourable in your part of the world, it's been hot. Damn hot! Real hot! Hottest things is my shorts. I could cook things in it... to quote Good Morning Vietnam. Even on Thursday evening last week after an overcast day it was in the twenties. I refer to that evening in particular because that was the evening that Anita and I ran Dinton 10k. It's the only one of the series we're doing this year and were hoping to treat it as our PB attempt. In all honesty we hadn't really trained for it. I've been putting together a bigger training plan for events further down the line and just hadn't given this the attention I could have. I think we were just hoping we'd just be fitter than when we ran Yateley last month, which wasn't an unfair assumption to make but it's taught me I need to build more targeted runs into my routine if I'm really going to improve.
The organisers moved the registration and start lines this year to give us better facilities and more space to spread out. We could make use of the cafe and use the walk past the enviable children's play area as a warm up. I'm not sure of the reason for the move but it did allow us more room to jostle and broke up what used to be a rather tedious last mile (which the 10k'ers do twice as it's a lapped course). It's a very pretty run with a much smaller entrance pool than Yateley and that's probably why I keep on coming back to it.

We set off fast... too fast really. Anita stuck with me for the first 3km but it was clear she wasn't having a good time of things and after some wandering dogs (LEADS, people, LEADS) and a twisted sign resulted in us taking a wrong turn she dropped back while I tried to push on. My middle two miles were slow but I managed to push in the final half a lap and snuck in under 59 minutes. Not brilliant, not what I'd hoped for and certainly not what I felt I'd earned but it'll do, especially given the wrong turn. If I'd gone out a tad slower I might have been able to maintain a 9:10 average rather than a 9:30. Anita came in about 3 minutes later and I made sure I cheered her over the line as loudly as I could.

There are masses of events going on at Dinton Pastures. There was a triathlon on Saturday but there are still aquathlon, duathlon and uber swim events coming up. I'm seriously considering both the aquathlon and duathlon!

You'll notice I'm sporting a rather snazzy looking visor in the pictures. Now I sweat easily when exercising at the best of times. Throw some twenty five degree plus heat into the mix and my face is a veritable waterfall. Joy. So I guess I'm a good candidate for putting Halo headwear to the test. At it's most basic, the Halo range are a selection of sweatbands, designed to keep sweat out of your eyes regardless of the activity. They come in the guise of a veritable rainbow of bands, visors, bandanas and so on. I've been trying out the Halo II headband (£12.95) and the visor band (£24.95). The one size fits all bands made from non-elasticated wicking material are meant to stay in place and direct sweat away from the eyes using their "Sweatblock seal" which "sits against the forehead, just above the brow line, and redirects sweat to the sides of the head". Let's see about that...

First up, the Halo II band. I put this to the test on a parkrun and also during some metafit classes and I was reasonably impressed. Despite my having a fairly small head it stayed in place and although I was wiping sweat from the bottom half of my face, I wasn't wiping around my eyes at all.

I didn't find that the visor band performed quite as well, possibly due to it feeling a little looser than the headband and therefore needing to sit a bit higher on my brow but over a number of  hot, sunny, afternoon runs it did a marvelous job of keeping sun and hair out of my face. Both bands were so comfy that I forgot I was wearing them. If you have short hair like me, you may spend some time adjusting the band purely to get your hair to look slightly less ridiculous but otherwise these look smart and certainly do what they were designed for. I would have happily paid the going rate for the headband, based on it's performance, but probably not the visorband. 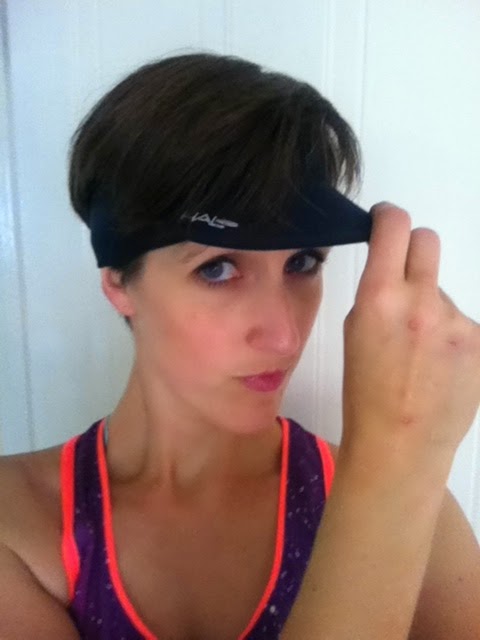 Disclaimer: Halo very kindly sent me products for free in return for a review but as ever, all opinions are my own.
Vikki Roberts-Caiger at 08:30
Share